What is a religious Government?

What is a religious Government?

It is a continuation of ancient ways of thinking. It is counter to intelligent thought. It was only a good way to rule (if at all, if ever) when you are dealing with a smaller group of people. Once you get over the size of a village, or town, you are looking for problems. If the entire grouping of towns or cities within a region all have the same way of looking at things, then it can extend to a larger model.

If however you throw things like communication via knowledge in individuals traveling, books, or more so, modern communication methods such as radio, TV, Telephones, cell phones, instant messaging, or the internet, then you have a variety of thought far greater than a specific ethnocentric religion can handle. People have their own thoughts, religion is by its nature, designed to be a rigid structure where in people's thought can be contained.

Once you have variety of thought, you have other religions involved in a group governed by that religious thought, you have problems and this form of government is no longer viable. Especially within a group whose standard of living is far below that of many other nations, you have people starting to desire luxuries, sometimes in the form of what other nations consider necessities. This attitude spreads across the hindered nation and you have unrest within thought. Throw in a lack of freedom and you have a top heavy government run by a group who are cut off from the people, eventually deluded and finally toppled.

What matters at that point is, how long, how cruel will that government remain in order to maintain the status quo, to continue doing what they think is best for the people (by their outmoded, outdated, archaic and anachronistic considerations) which is actually oppressing the people. What you have is a coup, eventually, or a revolution. Sometimes, you end up with an even stronger religious model in power.

Why? Because, especially in religious thought, people believe that if you are failing at something, in their ignorant beliefs, then you must need to be even more adherent to the ancient ways to rectify the situation.

A similar situation is there regarding any dictators. They too try to hold in their control, issues beyond their capabilities. They just don't realize it. They, like the religious leaders, are deluded. A dictatorship is never a good thing. A ruler, or ruling group in power, by the very nature of power, is not a good thing. 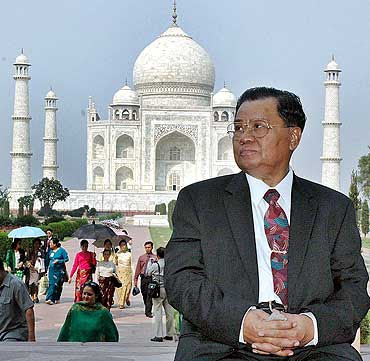 Myanmar dictator General Than Shwe
But what is really needed is 180 degree turn to enlightenment and a better, more modern, more functional, more accepting of differences, model. Something that will allow the central group to operate within a group that has a greater disparity than that religion was originally designed to handle.

And so, we have what is going on today. This is not something covertly propagate by a Western, Democratic, capitalistic society, this is what was going to naturally happen once you allowed things like telephones, TV, and especially the Internet.

What this means is that all those regimes who are religious in nature, or autocratic by design, you are forewarned. All you can do now is prepare your escape, because the world is calling you out. And you cannot last against eight billion people. All you have left is your desire of what your legacy will be. Take the money and run, because power, is running down your leg into the gutters.

Iranian President Mahmoud Ahmadinejad
The people will win in the end. This is a rule, a law and an historical predecessor that has proven itself throughout history.

Good bye to you (Iran, Myanmar, and still too many others).

Welcome back, to those oppressed, back to the World.
If it hasn't happened yet where you are, it will. It's only a matter of time.
Posted by JZ Murdock at 12:00 PM