Welcome to "Ugly" America Down the Rabbit Hole

Senate Republicans and their questionable leader have not cemented in the reality that a much "uglier" America is being led by a very, very "ugly American" and following his illiberal lead, some other "ugly" Americans. 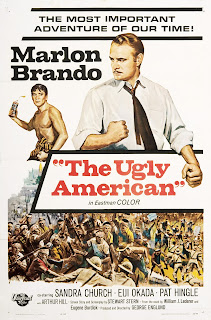 Welcome to today's world where governments are being forced down a path by foolish "leaders" of an electorate based on a movement of self-perceived hurt egos in the realm of white supremacies, ignorance, greed, and foolishness.

It may not be bigotry and race war that is at the base of this movement greater than America, but it is a similar base of thinking in cognitive dissonance, in the abandonment of cognitive powers. Where they are turned against both the individual as well as the society at large.

With little care, but with a great passion to continue the path one's on, regardless of the damage to themselves or anyone. Because they wish to believe, against all reality.

In a reference to Boris Johnson in the UK, an older woman caller from Wales said to David Dimbleby, Journalist and Podcast Host of "The Sun King", where Johnson's intentions in Brexit would financially harm Wales and this elder woman... her explanation was thus...and so very explanatory of what is also going on in the right of American politics:

What's that all about? Identity.

White Identity. And ignorance. And adhering to beliefs regardless of reality, because of assuaging perceived pain.

What's going on? A revulsion against politicians' divisiveness.
Lies behind painted faces.


This is what many think Trump supporters aren't seeing but feel is painfully clear. Maybe it will work out. But what we have is a delicate thing. As we've been warned time and again and time again.
"There are a variety of ways to gain power. There are illegal means to gain power through brute force; one can also gain power legally by winning a majority in an election. There are revolutions, Putsches, uprisings. But each of these methods requires a political group to win the sympathies of the broad masses, if it wishes over the long run to maintain is power. But the sympathy of the people does not come of itself; it must be won.
The means of gaining that support is propaganda. The task of propaganda is not to discover a theory or to develop a program, but rather to translate that theory and program into the language of the people, to make them comprehensible to the broad masses of the people. The goal of propaganda is to make what the theorists have discovered clear to the broad masses."
- Joseph Goebbels, Will and Way 1931

What is the solution voters, mostly right-wing voters have taken?

Just elect an outright liar. One you (mostly incorrectly) perceive to be lying FOR YOU. Rationalizing through incorrect beliefs in the economy, or whatever you can drum up to support you, to give you a perceived reason to be passionate, against all reason and at times, too many times, sometimes all the time, against all decency.

We have submerged beyond the rim of a rabbit hole it will take many years to extract ourselves from while many of us sit by a nearby tree, in the shade of reality, and wonder aghast, in pain, while those who were in pain, now feeling freed of that pain. [come on, follow along this is an Alice in Wonderland reference...rabbit hole, Alice, her sister waiting by the tree...nevermind...]

Because opiates, whether chemical or political or emotional, assuage one's pain, even if we should die because of it. Even when we are aware we cannot stop it.

And so, screw the rest.

Finally a bit of anonymous humor and a feeling for what's going on.