We Must Pursue the Best of and In US

From the speech JFK was to give, had he not been assassinated: 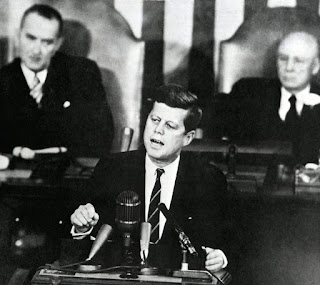 "There will always be dissident voices heard in the land, expressing opposition without alternative, finding fault but never favor, perceiving gloom on every side and seeking influence without responsibility.

Those voices are inevitable. But today other voices are heard in the land. - voices preaching doctrines wholly unrelated to reality...most especially from the right and Republican. Voices of quantitative, not qualitative considerations, with little or no regard to that of quality, or compassion.

Impassioned with numbers, not Humans.

We can no longer expect that everyone, to use the phrase of a decade ago, will, "talk sense to the American people."

But we can hope that fewer people will "listen to nonsense."

Breaking that down as we can clearly see today, Kennedy's entire first paragraph refers to and defines today's Republican party.

JFK's second paragraph refers to the extremes the GOP follows like ravenous puppies in they striving for never-ending power and wealth. While people die, while the earth dies around us.

JFK's final words define those of us who take the time to find what is real against the unrealities so very perpetrated ad nauseam by the right, by the greedy and by our few but singular and elite enemies within Russia and elsewhere.

One sets precedents to build upon, not to revisit out of vainglory and bigotries, our foolish and removed beliefs of inculcated ignorance we now see fanned into flame merely for the purpose of power and corruption.

Women have rights, minorities have rights, Reality has rights, over the many and varied disingenuous right-wing evangelicalizations.

Those are our Rights, our Human rights, our American rights.

And yet the rightwing conservative thinking, especially the religious-sects wish to tear down our advances from ignorance and self-indulgence.

Yes, we should be forcing decency upon this country, no matter your orientation or party. Not religious decency. But human decency. Yes, we should be supplying healthcare for everyone, and any argument that it cannot be done, be damned. We can do anything we put our minds and hearts to!

Though we might have to stop giving entitlements to the rich, to corporations who don't need it, to the military, to the petroleum agenda, to war hawks who keep us in never-ending vastly expensive wars merely so they can claim we cannot support our citizens, our infrastructures, rather just those citizens who have been impoverished and deluded into traveling the world murdering for us.

Yes, of course, we need a strong military. A wisely smart military. Not the one imagined by unwise politicians.

Rather than us doing the hard work and using politics and economic forces to aide the world, so we do not HAVE to have neverending wars that enrich the wealthy and powerful in a neverending cycle of draining our resources while enriching the wealthy.

We do not need to support the worst citizens of this world in such as Donald John Trump, or Mitch McConnell, or Vladimir Putin, Kim Jong Un, or Pres. Xi in China or the ridiculously conservative and rich, right wingnuts to the point that they are racist in actions, if not outright white supremacists in the likes of Marie La Penn in France, Putin in Russia, or Trump in America.


We should be building UPON these things, not trying to tear them down. Otherwise, it is like graduating grade school, then fighting tooth and nail to get back in that elementary school door again.

Brown v. Board of Education, established that racial segregation is unconstitutional.

Roe vs Wade, ruled that the Constitution of the United States protects a pregnant woman's liberty to choose to have an abortion without excessive government restrictions such as the GOP are pursuing today all across America. And under the guise of religious reasonings. Which should have no place in an American government that is based on a secular model exactly so that free citizens could worship in their own ways, or not at all.

That latter part is far too frequently pounded upon and ignored by those who are entitled, or in power. Religious have for far too long been used to abuse, to wrest power from the ignorant and the kind. Or kind minded.

The trial, of John Thomas Scopes, commonly referred to as the Scopes Monkey Trial, was an American legal case in July 1925 in which a high school teacher, John T. Scopes, was accused of violating Tennessee's Butler Act, which had made it unlawful to teach human evolution in any state-funded school.

These have been laid to rest. They are settled. Let us move on, and forward, not downward and backward!

For Trump supporters, IF you do not see Trump doing anything you do not like, outside of his personality or demeanor, in the areas of policy or actions, that is your FIRST sign that you are deep in not the conservative or Republican mindset, but the Trump echo chamber where you have lost your way.

Even during Obama, I liked just about all he was doing. And one did have to give him mass respect for putting up with all the Republican uselessness, abuse and racism he was up against.

You typically can't listen to the vocal extremists and haters but you can listen to those even-tempered and rational opponents. In hearing some of their comments, I took a look at some of Obama's actions and I did find them lacking, seriously so in some cases.

Still, MOST of the manufactured Republican noise against Obama was utter bullshit.

As it was with Hillary.

But some issues under Obama I did find concerning. Such as how whistleblowers were handed, how national security issues were being handled, how Putin was (NOT) handled. These were serious issues. Issues I know had much to do with Obama getting poor advice and of his own ignorance. but also of his trying to be functional at all under an onslaught of Republican abuse and obstruction.

What is so interesting there is most of the noise from the right against Obama was indeed utter nonsense.

But even as much as I respect Obama, he wasn't perfect. No one is. But sadly, that offers no excuse whatsoever to Donald John Trump.

if you think Trump is perfect, then you are outright defective in facts and reality and quite lost in the Trump "echo chamber" of utter and sincere bullshit.

Trump himself, is bullshit.

That hasn't been a secret at all, all through his years in New York. Everyone at his level knew it. And many far below him.

The Trump GOP is now bullshit. The establishment Democratic party is now far too much bullshit.

We do indeed need a change. Bernie Sanders appears to BE that change. Like it or not, that may be where we are headed. And if that's the case, ew somehow have to make it work.

As for Bernie as POTUS? I'd far prefer someone with decency and a concern for others, rather then just some dumb schmuck like Trump with little or no management experience other than to have his ego sucked whenever he wishes it.

Tar too many are all too ready to fall in his wake to perform. And to have free range to act the bully and never be called out for it or feel the actual responsibility of things like managing people, dealing appropriately with women, or actually making money.

Let's Change! But let's try something new. A change for the better!

Let's do the hard work. There are no easy answers and Republicans love those. Push-button fixes that fix nothing but kick money upstairs. Shallow explanations that fail with time. Shallow people who fail with time and then are promoted upward or outward. Or escape after damages with a |Golden Parachute.

Let's purge America of the despicable, the underhanded, the criminal in our government who have through the Trump Republican Party overtaken and begun to dissolve and destroy our government administration, overtake our judicial system and implode our Executive branch as well as our Legislative.

We need to put this country back on course, back on a better path, back on a path to the future and not the past, not our worst selves, but our better selves.

Back on Our Path. Back on the Path the Founding Fathers hoped for and worked hard to produce.

Really all we have to do it keep people from destroying it and it should run like a well-oiled machine. If only we could stop people from trying to subvert it for their own selfish interests and desires.

We can do this. We just need to do the hard work.