As I write this, last night I was at Bremerton, Washington's first-ever "Slash Night" a Historic Roxy Theater. There is to be another in a month, on November 2nd, 2019. And it was better than I expected.

Some great films were shown with vendor tables in the lobby selling horror memorabilia and an opportunity to meet some of the filmmakers. Some of my friends were there and perhaps some new ones. I've been asked to premiere my new film I'm currently in post-production on, "Gumdrop, a short horror" (a prequel based on my 2012 true crime short horror story, "Gumdrop City"), which is coming along nicely. I hope to have it ready by either the November or December Slash Night event.


The event was put on by director/promotor/producer Kelly Wayne Hughes. There was a kind of Frankenstein Drag MC in Hellen Bedd, in a camp kind of moderation on the evening which included one short film, one animation and main event flick, 1970s, "The House That Dripped Blood" with an all-star cast from back in the day. 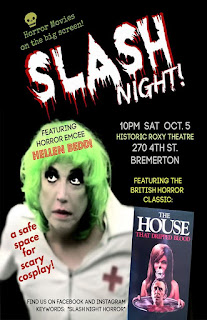 Out front in the lobby, which opens at 9pm, an hour before the film starts were vendor tables where you could purchase horror paraphernalia and boxes of movie posters for sale. The filmmakers were also available to meet.

Filmmakers in attendance (and there were others who didn't have films being played that night) were cartoonist, director, and animator Pat Moriarity.

Pat recently became a friend when he "world premiered" his new animation, "The Realm Beyond All Reason", which also played last night. As with the other filmmakers, there was a Q&A period after the film. 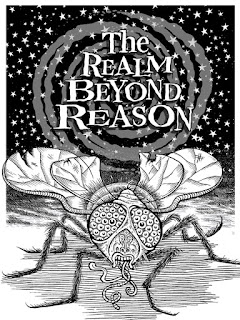 Name dropping just a bit here, Kelly and I are headed over to Pat's Tuesday evening to see his collections and hang out to have beers and BBQ. I'm looking forward to it. Pat's a truly fun and knowledgable guy who once worked for Mad Magazine and his underground comic style of cartooning is obvious. As one filmmaker put it last night to him after his film played, Pat definitely has "a real hand" in his drawing and artistic abilities and sensibilities. I would fully agree.

The other filmmakers who showed up with their short and amazingly dark and funny film were the guys from Laslo Films (attended by William Stancik and Gabriel Wagner).

They showed an amazing, dark and funny short, "Amphetamine Trucker Lament 2 - 1971"."You've never seen a man truck so hard. (Because Laslo Films loves you.)" I look forward to seeing other films from these guys.

The December event may be on the second Saturday of the month as they have a pre-existing event on the first Saturday night. Thanks so much to the Roxy Theater for allowing this event to be put on. If things keep going in this direction, this is going to be a stable and very fun monthly event in Bremerton.

After all, how cool is it to have an event where you can peruse some cool horror stuff to buy, to see some cool old and new horror films and meet some of the filmmakers?