I've been editing the video I've shot on my short horror film, "Gumdrop, a short horror". This blog is for those new to filmmaking really, as more experienced filmmakers already know much of what I'll say and may even roll their eyes from time to time or simply shake their head wondering how I even turn out a product. Well, it's working for me. For now. And I'm learning as I go. And as we all do.

I passed twenty minutes in length yesterday and I'm hoping to keep it under 30 minutes total.

First, I would like to congratulate my friend and cartoonist, Pat Moriarity! He is doing very well with his first animative project, "The Realm Beyond Reason"(using Adobe Animator with Adobe's aide in software development) which he world premiered at our Gorst Underground Film Festival recently. He just won a "bloody" award at the Bellingham, Washington, Bleedingham A Northwestern Horror Short and Film Festival! Congratulations, Pat!

If things go well this coming Saturday, November 2, 2019, at the Bremerton Historic Roxy Theater "Slash Night" event I will be screening it for attendees along with other horror films, live entertainment, and filmmakers with their films. If I don't get it ready in time with a rough cut, I'll premiere it again the following month on December 14, 2019. Slash Night is first Saturday night at 10PM (December saw a previously scheduled event on the first Saturday so we're using the second Saturday). 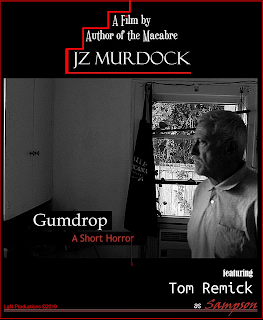 Gumdrop", is my short horror film, a prequel based on my original short horror true crime story, "Gumdrop City" which was published in 2012 and I first heard about in an abnormal psychology class at Western Washington University toward my degree in the major of psychology and a minor in creative writing and team TV script and screenwriting.

It was a horror show of a class the day we were told about this crime. And so I wrote it as a fiction story and worked it up as an unfinished screenplay with a producer in Hollywood a while back. I may still finish that feature film as I'm not signed and have a producer attached to my other true crime and biopic, The Teenage Bodyguard with producer Robert Mitas.

My blog for last week was also on "Gumdrop" but I've made progress and because I may (hopefully) be showing it this next weekend, I'm updating my progress leading up to it.

I'm new to this editing software and I started editing film as a kid. Then did a phenomenology film in 1983 on black and white reel to reel videotape, a documentary in 1993 using VHS videotape and a short last year using this Sony Vegas Suite software on "The Rapping", which won one small award and showed at the NY Midnight Horror Festival.

One of the things that bugged me in this new effort with many hours of video shot and about thirteen actors involved was the paring of my separately digitally recorded audio with the visually recorded shots. What is the fastest way? I tried several things and it was painfully slow.

So I just moved forward, finding the best shots, following my screenplay roadmap, cutting them in, sometimes finding better shots or "lost" shots and replacing what I'd edited. Sometimes finding that a different order of shots or scenes comes out better than the planned route and readjusting to fit that new slightly different story and editing it as what turns out the best film. Or perhaps I should say, movie, as it moves along and isn't on film but video.

This was/is all rather frustrating at times, but the end product, not my feelings, or energy levels, or emotional state, or level of perseverance, really matters. On that plane, the thing that matters really, is your audience and your intentt in your project. First off? FINISH IT!

What I've settled on is to just cut and edit. Finish it.

Then I will go back, list all the audio clips/filenames and video clips/filenames and process the audio in my audio software (I'm using Reaper), then marry the audio to the video and replace the video in the editor. That will replace all the clips all through the project. Not for the faint of heart, but in the end, it will certainly produce a much better product and... audience experience.

I do have a backup mic ON my camera but if I'm using autofocus (which I seldom do but has almost accidentally given me some incredible shots...when it works right), you can hear the motor on the autio focusing. Besides, the digital recorder (Roland R-26) using a boom and separate and better mic (Rode) allows me to better position the mic where it needs to be recording from.

So far? It's been an interesting experience editing.

I've learned how to push through the frustration things I missed on set, like an actor "spiking" the camera (looking into the lens, breaking the "fourth wall" and ruining a shot. Or my saying "cut", too soon in a shot (do NOT do that!). Always record a bit before acting begins after saying "action" (or whatever you say, as the Clint Eastwood story goes that he doesn't because he was used to not hearing "action" on a set with horses so as not to spook them and the same goes with some actors).

And let the camera record too much even in silence, at the end of a shot. You never know the gold you mine in that sometimes. Everyone rushes on camera for some reason. Well, inexperienced actors whom I'm mostly using. Oddly enough, the most experienced actor n my production is Jennifer True and I only used her for some voiceovers, sadly. But she came late to the production and... maybe in the next production. Hopefully.

Whenever an actor during a shoot has an alternative to how I want something shot, I listen to them. I don't always take the shot, unless they insist and then sometimes it's just easier and faster to shoot it and move on than to argue over it.

Sometimes, they don't want to do what I want but another way. So I listen, and if I can't get them to drop it, I just sa:

"OK, let's shoot it your way. But, and especially because I wrote [when I have written] the screenplay, let's also get my shot down also because it's stuck in my mind. Since I wrote it and I may indeed while editing, use your idea/shot and I will honestly look at using it. But I can't move on with a clear mind unless I get MY shot. It will continue to bug me going forward, just as not getting YOUR shot as you want, now. So please...and, action!"

Filmmaking is indeed a collaborative endeavor. Even though I AM my entire crew now. I do hope to get a crew eventually. It would be so much easier, though scheduling then becomes the nightmare it usually is.

Still, I do believe that you need to choose the right actors for the parts because that's half the work. The actor learns the role (hopefully) and knows the character (again, hopefully). So when they say, "I think they might do this, or say that...", listen. Give it a moment's thought. Even if it's "ridiculous".

Because sometimes you don't et it at first and they are right. it can take time to absorb it. Understand it. But the4y are living the character more than you and that is collaborative,, and highly useful. Use ALL your resources. Not just your desires, your roadmap, your style. Be open. And you will find a wealth of two things. At times, utter annoyance and frustration. And at others, sheer bliss and perfections as if touched by the Gods.