Is there an argument for the State execution of Pres. Donald Trump, once he is removed from office? I believe the consideration it is now rapidly being approached and very likely will soon be surpassed.

Why do I keep thinking of the French Revolution of 1789 – 99? And, "Why [does] President Trump resembles a pre-revolution French monarch."

Either way, treating our abusive leader appropriately, is really my point in all this.

The argument against it is far less strong with each passing day. Not to mention Mr. Trump's own orientation on the death penalty being required for certain crimes. It's not a long stretch to consider if he were on the other side and himself were his enemy, he too would be calling for the execution of a traitorous POTUS. Especially if he could have pushed for that against an obviously far better president in Barack Obama.
First off, IF we allow this kind of abuse to go unpunished, we are essentially following the Donald Trump foreign policy for his beloved dictators and the abuse of national leaders' own citizens as in Syria or even as with Saudi Arabia against a journalist: "Oh well...."

We have GOT to send a strong message to not just Donald Trump AND his people who appear to be dropping like flies in a firestorm. And the vapid and zombie Republican party for this manufactured nightmare. But also to ANY other party (or foreign actor) in the future who may consider similar actions against the American electorate in their desire for power and position, or simply...chaos.

That includes Vladimir Putin as a foreign actor against America and as well against his own country. Putin needs to be removed. I can't say that enough and I'm sick of saying it as I have since about the year 2000, a year after he took power.

Perhaps, had we better helped and made better decisions along with Mikhail Gorbachev in the bringing down of the Iron Curtain, we would never have seen a coup that replaced him with the alcoholic criminal Boris Yeltsin. Who then put Putin into power to protect him and his family from prosecution once he left office. It is a chain of authority from a decent path to a criminal path until today we have a State Criminal in Putin and a government he crafted in his own ex-KGB image.

Obviously, we need the appropriate and legal proof against Donald Trump to act upon it. The last thing America needs now is more illiberal or criminal actions in our government. We need to not follow in the footsteps of Russia.

Or China for that matter in their recently giving Pres. Xi a position for life. A stupid move. A very stupid move for any country to do. And a sign that something is very wrong. One that other nations need pay attention to and in their dire fortune if they ignore it. As they are doing. As we are all doing.


We must also take a stand against presidential plausible deniability. A tough thing to accomplish.

Which one should suspect Mr. Trump has already screwed up anyway and may prove not to even be a concern for us. Mostly because of his innate ineptness and that of his crew along this path he has taken these past decades.

We obviously have to be sure what we're doing. That is, to be transparent. As there will always be those who believe this is being done TO the POTUS  and somehow had not been done BY him and to himself and therefore, to America at large.
That being said, IF Mr. Trump did these things, IF we cannot prove it in the normal ways, then it needs to be proven in an appropriate enough way to succeed in finding a ruling that should be found in considering just what he has done. Leaving things like plausible deniability by the wayside. We need to protect the citizens by rule of law. But we also must protect the nation by rule of reality.

Presidents DO need that capability at times in plausible deniability, in order to not be held accountable. There IS  a legit reason for its existence.

But FOR the American nation, the American people, and not against them as Mr. Trump has apparently done. All for wont of money and power, to satiate his defective ego and personality. That is no longer in question. Mr. Trump obviously has some serious defects. Defects that should have disallowed him ever to become POTUS. We have damaged the office of president, ourselves in allowing such a man to enter into it.
Otherwise, we will have allowed ourselves to continue to be dupes to what and who is basically a conman in a Donald Trump as president.

However, if all this happened as we're seeing it, but Trump is technically "clean" though obviously not, as a nation we have got to demand appropriate repercussions. We cannot let a conman slip through our fingers because he is the president.

Just as being POTUS should have certain protections, so too it should not have certain protections because of a situation just as we're seeing before us now. The loopholes have been found by the Republican party and Donald Trump. When that happens sometimes you have to step sideways and correct an abusive action, in the most powerful and democratic ways available to us.

IF for no other reason than not being seen worldwide as the fools we are now being seen as!

Otherwise, we will inevitably see this action again and again, over and over again, against us. These conservative Republican abuses will continue against America (potentially and quite plausibly with the aide of one foreign entity or another), UNTIL we do something aggressively against it in order to once and for all, stop it. 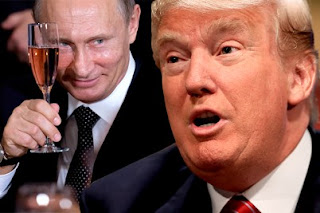 We have got to end all this nonsense now! End all the extremist conservative right wing abuse from the GOP, from the NRA (which reportedly now may no longer be with us anyway), from Russia, from criminal types like Putin, from THIS president...once and for all!

Saying that this is treason, is actual and real patriotism. Unlike the fake forms of nationalism we've been seeing from the far right and not so weirdly enough, also from Russia who has been backing them.

When Nixon was pardoned by Press. Ford, I was like many, angry at the time. But eventually, I came to see Ford's reasoning. in order to protect the office of the president.

That certainly is not the case any longer. Quite to the contrary, this is exactly and specifically not that case.

Through this process, we have also got to work toward putting an end to this bacterial infection of authoritarianism worldwide. We need to end the greater potential we see for war today and the abuses from our wealthy who are involved, our military-industrial and our corporate sectors who have all had a stranglehold on what IS after all, OUR government.

It's time to clean things up. To truly empty the swamp Trump was foolishly elected to empty and instead, filled to the brim and overflowing with his political appointees. In the cabinet, in his offices, in our judiciary. And not for partisan, organizational interests, but for his own personal financial gain and empowerment. Never satiate an egotist's personality, that never goes well for anyone involved.

And yet we've force-fed Mr. Trump at his request again and again. 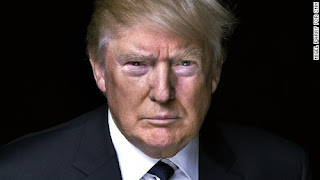 Trump is not the last, but merely the first domino. We need to flick his blank piece, executing the beginning of the end for as many of our ongoing nightmares as we can effectuate. Now!

We are and should be in control. We just need to start acting like it! An America for all. Not just a few. 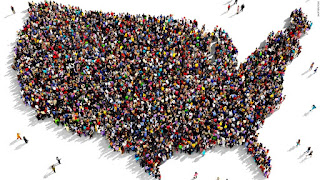