Merry Christmas! OR, Happy Holidays. Why? I'll tell you...

Merry Christmas! It seems like a fairly innocuous greeting.

It has inherent goodwill intended. Which confuses some.

Because we live in a diverse world, a diverse multicultural, multitheistic country and environment, we merely need to be aware of that in our thoughts, speech, and actions.

No, it's not asking that much of us. For myself, I was raised Catholic, old Slovak Catholic. I went through stages of seeking God and found how humankind invented all this thousands upon thousands of years ago.

I have in my search for what is truth in religion, or "God" in a supreme intelligence, or whatever you wish to refer to it as been through many stages. I see using the gender of "Him" (or "Her") as questionable in ascribing a kind of anthropomorphism to an entity far beyond our understanding and why ethereal beings need gender is quite beyond us, though not really).

From my childhood and deep into my 20s, I have experienced being a "born again Christian" in my late teens. Then in my research and studies to "find God", an agnostic, an atheist, an agnostic again and finally a follower of reality as best it can be defined, through science, through the Buddha Dharma when lent itself to the Christian form of restructuring Judaism, and also Aikido, "the Art of Peace".

I was surprised to find how much "Buddhist" beliefs fit into Christianity and general psychology orientations during my university years of study toward my degree in psychology, and in Phenomenology, and physics.

That being said, I don't just have a problem with Christmas and below I'll explain why.

IF one cannot function appropriately and positively in that kind of life, one in America's "tossed salad" citizenry and community, one of diversity, of inclusion, of acceptance and fellowship, then one is of limited mental, emotional and cultural capacities.

So before you start ranting about the ludicrous immature belief in a "war on Christmas", of which there is none, but is rather an opening of awareness of others besides one's self or one's culture or religion, or in some cases, one's "bubble", do consider you are merely extending that well-intentioned greeting to other to whom it may have no meaning to them.
Not everything is as we believe.

What we believe to be is different originally than we thought to begin with. So there is really no need to be zero tolerant, or uncompromising, or to believe in a war on something merely because of a call for greater awareness and understanding of other's different cultures or religions. Essentially...

It's Okay! We need either greater awareness and compassion for one another or have more wars and cultural friction and misunderstanding of one another. Especially during a season that calls out for greater compassion and caring, help and sacrifice for others, it truly is, okay.

So why would you offer it to them? It is obviously out of ignorance either in an understanding of our country or specifically in another person, you do not know very well and perhaps should take the time to consider and address them appropriately in a way they can understand what you mean and intend.

To wish them goodwill and happiness this season. Christians, many of them, like to point out the original intent and meaning of "Christmas" is all about Jesus. But as was pointed out above, that is at very least disingenuous and even, ignorant.

It really just means we have to give some thought to something we may never have given much thought TO. Which is actually the original intent of that greeting. to wit, if you are NOT giving it enough though, in the first place. You are actually, in the bigger picture of things, going counter to what you are trying to do and say. In trying to point out to others that there is or was a war on Christmas, you are the one missing the point in coming from Christians who cannot actually give the greeting enough thought and feeling, in order to share it in the most appropriate and productive ways.

Even if that means using another greeting.

This really isn't all about you after all.

What we all really need more than anything else in this world, is simply to all get along.


So with all that being said, I really have to end here with this...

Merry Christmas! Happy Holidays, whatever you believe and practice! 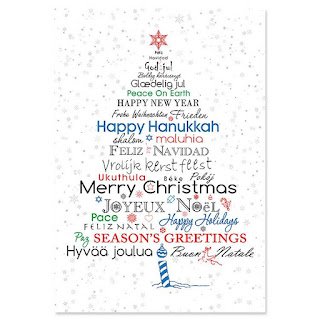