We should all be sick by now of the abusive nonsense by conspiracy paranoids, extremists, Republicans, conservatives, agents of our enemies, and agents of profit seeking special interests pushing ridiculous agendas.

This nonsense about the 2nd Amendment by those who cannot understand the difference between their current situation in a powerful and well established America and that of the original and tentative America founded through our US Constitution and the need not that much later on for Amendments to that Constitution.

Look, entire books have been written about this subject. The Supreme Court even unwisely ruled on it. I'm not saying I'm smarter then them, but partisan issues to come to bear there. I've read some of the books on this, many articles and papers and researched this to my own satisfaction as a university educated and professional researcher. Which means I'm not seeking to prove my beliefs, but to find the truth. Remember that? Truth? I'm not going to expend lots of verbiage here on this. I'm going to try to simplify it for those who want a quick answer and for those (probably those against what I'm saying here) who seem to have trouble understanding the second amendment.

Or even the simplest of concepts. Like how a Pres. Trump is bad for America (yes, worse than even a Pres. Hillary Clinton from what we're seeing, far, far so much worse) as well as the entire world. But that's another topic where now several (not one or two) government investigations are under way.

Those who cannot understand this are our ignorant and apparently poorly uneducated (or if not, then simply disingenuous) Americans who appear to be willing (like our current travesty in Pres. Trump) to lie, cheat or steal in order to keep their favorite toys (military assault weapons) easily available to literally it would seem, anyone.

Do we need to appeal the 2nd Amendment of the US Constitution's Bill of Rights?

A well regulated militia, being necessary to the security of a free state, the right of the people to keep and bear arms, shall not be infringed.

Civilian so called militias are not the militia indicated in the 2nd Amendment at all. The intended may be referring to, using civilians as militia, but it refers to a top down not a bottom up, entity.

Also, to bear arms seems to confuse some people. For instance, we need to define, bear and to bear.

In the Oxford Dictionary, it means to bring something to bear, which is a good point in relevance.

That is to bear down upon or aim at. To bear arms therefore indicates taking up a weapon against someone seen as enemy with intent to aim at and kill them. As in martial actions against another. But as governed by the state.

Even if militias organize, practice (some would say for many of them, playing at) for the good of the state in the case of the GOVERNMENT needing them for the security of a free state.

Not the security of the civilians against a free state as many now believe. Rather to be ruled over or governed by the state over those militias.

That means that a  militia is allowed to be prepared, but not against the state, as many of them feel they are. Rather FOR the states and against as should most reasonably be considered, all enemies foreign and domestic! We now actually have to concern ourselves with whether this includes our current Pres. Trump and his administration. Brought to us by many of the same people who cannot understand the meaning and intent of the amendment in question here.

There is also the point that one does not bear arms against a rabbit. Therefore it does not actually indicate hunting as so many claim.

Also, arms as in the right of the people to keep and bear seems to confuse too many people. Far too many people, actually. But then that gets into our abuse and lack of support of our educational system. We have been dumbing down Americans who cannot afford a decent education for decades now.

And here we have the results. Uneducated if not outright stupid Americans voting against their best interests and unable to understand what the Founding Fathers thought was one of the simplest of amendments. But one they knew people would misinterpret, which is why it was worded as it was. Also though, worded as it was merely because they wanted to get something passed and put into law, accepted by all the states then voting. And they did.

Though I doubt they could have foreseen the nonsense we're seeing today they more assuredly saw some of it. But only perhaps, a third of it. I doubt they foresaw modern assault weapons or even the self contained firearm cartridge for that matter.

The bottom line here is that the second amendment is for the government, not the citizens.

We also have to be wary of religious militias. Christian militias for instance. We've seen what so called Muslim militias can do in other countries in the form of ISIS. The last thing we need in this country are religious based militias. Or even conservative, right wing, ultra extremist militias.

Granted, although some militias may take themselves seriously and professionally, we still have to deal with the many that do not. Some of which shouldn't even be allowed near a gun to begin with. And even the professional militias, still need to be governed under the government and not aligned against it, as so many covertly (or overtly) are. 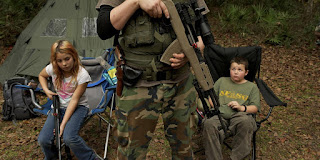 And that is its orientation. In now having a standing army, we no longer need militias. Therefore that amendment no longer has any real standing or need.

It may be sad that Thomas Jefferson was against America even having a standing army, as it begets empire building (actually kind of as we've been seeing).

There are instruments so dangerous to the rights of the nation, and which place them so totally at the mercy of their governors, that those governors, whether legislative or executive, should be restrained from keeping such instruments on foot, but in well-defined cases. Such an instrument is a standing army. Thomas Jefferson to David Humphreys, 1789, 549

Yet, in over two hundreds years we're not seeing this happening. So it's become a moot point. Was Jefferson wrong in his concern? No. But the system as designed would seem to be working well enough that it has not become an issue.

And let's not forget other wise things Jefferson said:

What then is the issue? The second amendment. Not really so much that of itself, as those who wish to twist its meaning and bastardize its intent for their own reward (NRA, gun industry, conservatives) and benefit (maintaining power, self aggrandizement, financial reward).

There are several things we now need to address and remove in our government because of the abuses we've been seeing that have led us here to this dysfunctional point.

First and longest term, we need to address our educational system. Free school at least up through a two year degree...for all. Better, four year colleges should be free, and more of them (and less (and NO more or any at all, private corporate) prisons, which is entirely another important topic).

Removal of the Gerrymandering process which has corrupted our system for far too long.

Removal of the electoral process which again has corrupted out system for far too long.

And finally, removal or rewording of the second amendment which has been corrupted in meaning and intent through disingenuous definitions by mostly conservative interests and greed.

I would argue for removal of the amendment since until we address the other two issues (three if you wisely include fixing and bolstering our educational systems which will take at least a generation to return wisdom to our culture in properly educated citizens), we will find any attempt at rewording the second amendment will merely further corrupt it in the dysfunctional direction I have just pointed out above.

So here we are where we now need to move forward and stop the slaughter at home of civilians by civilians.

Or will we simply remain at the current and dysfunctional status quo, which conservatives so love and have forced into place while we all know that moving forward, being progressive, is the only way to progress and to move forward.