What do all these armed protests, this religious-based hatred of government and news media all have in common? 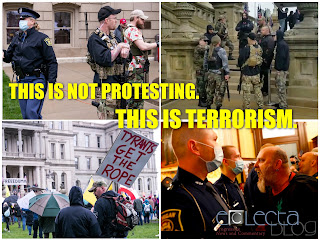 A desire by those involved to be superior, but really, just to "feel" superior. It really sounds very Donald Trump-like.

That desire to feel more than.
To be considered with due respect to all those others who have earned it.


Which these protestors obviously haven't earned or deserve.
And boy, that pisses them off.

One has to have done something to deserve all that.
So, do something? Something of actual substance.

Because hat you're doing just isn't it.

But there is nothing. Is there.
And that frustrates you.
Doesn't it.

I feel your pain.
Welcome to most of the human race. Most of us aren't that special. Deal with it.

We're all so very happy for you in you're scaring the living hell out of others with your guns and anger. Like in the state capital in Michigan.

And in doing your best to neutralize actual journalism and continuing to prop up misinformation and disinformation.

That's not the answer you're seeking. It's a temporary fix. It's a short-sighted, short term "fix". and it's not a fix at all. Is it. But ego-stroking, inflating your ego. Your "Donald Trump" moment.

You're spreading a very bad virus. Stop. Think for a change. Seek real information. Learn. Get out of your bubble. Review all the information out there, not just yours, Not just want makes you feel good.

Because reality can be ugly. But not as ugly as what you are eating.