Beware, Be Aware of Perception, or Lack Thereof

I was just trying to explain something to a professional associate regarding who I am, how I am, and how I think. As an individual, I am really very easy going. That's a story unto itself. But I love humor, and I can come off as a bit goofy, or a screw up even. But I am not.

That demeanor of mine has confused people... all throughout my life. I've been taken as a fool, or ignorant, or a slacker even, until one starts talking to me in detail and finds I shoot past them into issues unseen, unknown, or unacknowledged by my interrogator, or at times, my tormentor. It is interesting that when I used to fight in martial arts tournaments, I won fights with that same..."talent"? Don't judge the book by its cover? After years in IT work, at some fairly high levels, some of that has been sloughed off.

I spent the first part of my life, fully intending to go into espionage. I heard early on that those who stand out, tall, big, loud, do not make for good spies. They stand out. And a spy doesn't want, especially literally, to stand above a crowd. It's too easy to get shot that way. Or uncovered when... undercover. I learned to blend in, I could disappear into a crowd. And I was 6'2". I learned how to be seen as someone not to be concerned about.

But that began in grade school to avoid bullies, and groups of guys wanted to pound me into the ground. Because I was loud. Because I did stand up for myself. And because I was a big toddler, who got used to terrorizing bigger, older kids. Until one day I was smaller than the other kids and they realized they could fight back en masse. I didn't get bigger again until 10th grade when I lost a few pounds, shot up a few inches and then had to regain my footing.

It didn't help that in grade school I had been in five different schools, in two different states before sixth grade.

I started learning about killing people in fifth grade. I spent junior high school years learning military thinking and skills. I learned weapons, firearms. Hand to hand combat. I practiced sharpening my mind (for what it's worth). Sadly, I also found emotional issues difficult in my life and sought out because of my family life, my personal self, and the counter culture (which wasn't counter to me, it was my culture) in the 60s and 70s and even 80s.

I entered the Air Force and worked around very serious equipment and people. The most serious in the world in working around nuclear weapons. Though we also had a good time. Work hard, play hard.

After I got out of the service I went through various life events, got a couple of college degrees, one a university degree in psychology majoring in perception and phenomenology in the Awareness and Reasoning division from Western Washington University. I worked over seven years at the University of Washington, and at two major Medical Centers associated with the UW, one the regional trauma center

My point being, I've had a serious high-level attention to detail lifestyle for much of the first part of my life. I've built a mindset that is based on life or death, unlike (and thank "God" for that) most Americans. I don't view things as armchair quarterbacking, but will if I will die if I get it wrong. That being said, sure, everyone is wrong sooner or later. But not usually on major issues.

That is my basis for how I think today.

Yes, I've gotten lazier, older, somewhat sloppy in my old age. But that level of accuracy is still, as I've discovered repeatedly of late, above and beyond that of most Americans... on their best days. Yes, that is sad. No, that is not bragging. That is stating something I originally found surprising, and find on an ongoing basis, very sad, and at times, pathetic.

We in a word, need to be, or become, "Enlightened" in the Buddha Dharma sense. In the Buddhist sense of reality.

When you bite into an apple, you need to feel, to "see" where it came from, who picked it, what their life is about, how they suffer in seeing that deliciousness into your mouth. How those trees exist. How they thrive or do not. How these trees support our air, our world, our physical and our aesthetic.

How those apples are picked, cleaned or not, sorted, bought, sold, transported and sold to us.

How we metabolize those apples and secrete them back into the world.

Doing that with all things, whenever and wherever possible, will bring us, some of us kicking and screaming, back into reality.

If ever we were there in the first place.

And the world and all of us, will suffer far less for it.

Just, don't be this guy: 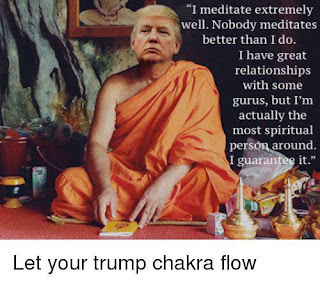