Who is Dragon Boxer?

First up, Have a great Veteran's Day! To all us vets, Thanks! Go out and find one vet during your day today and simply say, "Thanks!"

Then find one politician who didn't use enough politics, what they are elected FOR, and who found us into yet another war, for corporations and profit and say,

Then thank another Republican for all these wars of profit.

And remember Republican Pres. George W. Bush took us to war, forced the intelligence into existence that would support yet another war we didn't need and took us into Iraq murdering thousands upon thousands and thousands of Iraqis for no God damned good reason whatsoever!

That's not partisan crap, it's fact. Read a book! The information is out there, vetted, and reality.

Dragon Boxer. The international star from 2011, is back! Sort of.

Who is Dragon Boxer?

Well, that's the question, isn't it? The first appearance of Dragon Boxer was in 2011 in Europe when I made a short happy birthday video for my daughter who was traveling Europe alone, with her backpack, and her accordion. Paying her way singing around Europe, even touching briefly in Eastern Europe. She lived in caves on the southern Spanish coast.

She lived in empty buildings with artists. She was in Greece during the labor riots when she detailed to me heading "home" for the night through streets with cars on fire and rioting. She called me one night from a truck stop on the French border at 2AM when it was freezing cold and she had no idea how she was going to get ... somewhere.

A truck driver gave her a ride and eventually, she ended up in that cave on the Spanish coast. For a while, she lived in an apartment with other musicians. they would play music in the kitchen and at least once, had the police arrive to ask them to tone it down as other tenants were complaining.

I tell you all this because it becomes apparent how reasonable it might have been for at some point, her spirits to have lowered to the lowest. It was her birthday. I was frustrated in being so unable to control her spirits, her happiness, she safety.

I was in my bedroom at one point and I came up with the only thing I could think of. To take the hand puppet I had been given as a joke when I left my employment in 1994 of over seven years at the University of Washington, in various departments, and make a short video in order to try to cheer up my daughter, off somewhere, in Europe.


This short stupid little video had the desired effect and did indeed cheer up my depressed daughter. I put the video away and didn't think about it until some years later. I brought it out again for a Happy New Years' video.

Over the years I had shown both the puppet and the Happy Birthday video to kids and even some adults and they all laughed. The kids especially loved it. And when they met Dragon Boxer, they seemed to be very attracted to it. I don't think I've ever gotten so much out of a joke gift before over so many years.


It occurred to me that there was something there. And so Dragon Boxer, International Star was born!

I have been in pre-production on my short horror film, "Gumdrop, a short horror" which I shot during the summer of 2019. During that, I asked Dragon Boxer if he'd like to make a short film for fun and he said yes. Thus, "Below in the Dark, A Short Halloween Enigma" was created in 2018.

I mention all this because we have been putting Dragon Boxer to work. He's open for management by the way. He's a real pain in the ass to manage and I don't want to do it. But someone might and that would take him off my hands. And he eats...good grief. Well, that's another topic.

Anyway, he interviewed actor Jason Lockhard who has worked with director Kelly Hughes and is now in my film, "Gumdrop, a short horror."

Dragon Boxer: Hey, so, Jason Lockhart, actor, father, raconteur, whatever, how are you and thanks for visiting and being my first interview.

JasonL: Sorry. You've what? What is that, thing? Over there?

DB: We found human DNA from 10,000 years ago, recovered, reconstituted it, grew it, and produced, a man. Oh, that. Jay's handy work. It was a... ? We'll have to get another one, that one's trashed beyond repair. Only took him a second. Said, he didn't like it. It made him uncomfortable.  New people seem to make him a bit uncomfortable, too. Anyway, now that just makes him laugh. Interesting talent, that.

DB: Yes. Well, resurrecting a dragon would be stupid. They're mythical creatures and...I'm the only one so far, so... anyway. We named him. Jay. But that's not...it's not what's so, amazing, about, all this. Did you know that synesthesia is like other things, a part of all of us, as children? As we were all once female, we all once had to learn to differentiate, to compartmentalize our senses. We had to be trained out of seeing sounds or smells, or hearing colors, and so on. There may be other sense mixes going on but typically a child saying, Mommy, I can see the music playing," leads to Mommy saying, "No, honey, you can HEAR the music," when in all reality, the child may ver welly be hearing AND seeing the music.

JasonL: I really don't see what this has to do with any...I thought this was an actor interview?

DB: Yeah, you've thought a lot of things. Like what the hell is this about? 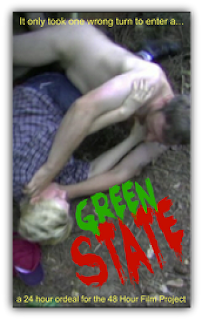 JasonL: That was from Kelly's film I was in, Green State.

DB: Okayyy... You have heard stories from the past of miracles, magic, and so on, all of which you don't hear about anymore, right?

DB: Right, and so have most people, a reasonable assumption. But what if...what if we were a more simple people? We certainly seemed to have been more passionate about our beliefs. What if...what if witches did have powers... sometimes. Not always, as certainly many innocents were killed in so-called, "witch hunts".

DB: What if the brain chemistry, who knows, maybe the entire human anatomy, was conditioned so that these magical acts actually could happen?

JasonL: Okay, but I don't think I'm following you, yet.

DB: Modern physics has learned a great deal recently. And much of that indicates some very bizarre things. What if this universe is a holographic projection? What if we are existing in the event horizon of a black hole or are projected from one? What if we create the universe every time we look at it, but when we don't look at it, it simply doesn't exist?

JasonL: Yes, yes, I've heard all of that.

DB: Okay then, what if we have, as we have taught children that they cannot see sounds, hear colors and so on, taught ourselves that we cannot see magic? Not so much, "magic", but what appears to be magic. Now, what if we found someone who was alive back when we believed it, what if we could access the capabilities of someone like that? What might happen?

JasonL: Wait, so you're saying, someone from the past could produce magic, and you've now produced someone like that? Surely not all of them could be magical and you may have produced only one who cannot do this? How...odd.

DB: That's what you find odd about this conversation? Okay, well, yes, there's that possibility. But I conjecture we all had that capability, thousands of years ago. But we merely convinced ourselves, mentally, socially, biologically, that we couldn't do it. No doubt many of the strictures of churches, various religions, came about to be precisely because of those capabilities and that added, with extreme prejudice, to our ending such marvelous gifts and practices.

DB: Exactly. So. Would you like to meet our new friend...Jay?