I may be missing something but this seems patently stupid how we select Supreme Court Justices. On a nine Justice Supreme Court of the United States (SCOTUS) we need an always balanced court with four conservatives, four liberal and one swing voter.

There is a new petition on WhiteHouse.gov calling for what we desperately NEED. A balanced SCOTUS, by Constitutional Amendment! 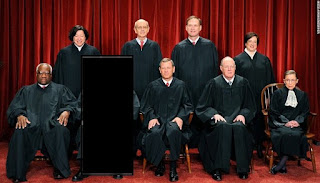 It would seem to me regardless who is in power, on a nine Justice SCOTUS we need balance to protect America and our laws. We are seeing now a days a problem in those in power being able to choose more power through appointing judges and Gerrymandering. It's broken. The original intent is broken. We need to balance this out going forward. The concept of the President being selected by the People, is no longer accurate. It has purposely been skewed by the Republican party, conservatives, and of late, by a contrary anti Democratic nation, in Russia, and more specifically a criminal leader, Vladimir Putin.

Wouldn't it be better, to have four conservative justices selected by a bipartisan Congressional confirmation process, weighted more heavily with conservatives\Republicans as they choose?

Then four liberal justices selected by a bipartisan Congressional confirmation process weighted more heavily with liberals\Democrats as they choose.

Then finally one justice to be selected by an equally bipartisan Congressional confirmation process to select the swing vote Justice. I think it may be time to end the President having this power to submit justices for SCOTUS, or otherwise. As for judges in each state, that's another matter. Having central government select judges across the nation leads to too many conservatives, or too many liberal judges nationwide.

When we need moderation. Judges for life is another questionable issue based in a need of them being above being threatened, but bringing into the mix what we see now in some judges who should no longer be judges and yet, they are there until they quit, or die?

Supreme Justices can still be suggested by the president, but also filtered as now through Republicans and Democrats, equally in Congressional Confirmations This isn't about the president, it's not about Congress, it is after all and should be, about the PEOPLE.

When a Supreme Justice vacates depending on position as conservative, liberal or swing voter, that Congressional panel (conservative weighted or liberal) would be put together to properly execute the process so that in the end the People will have a well balanced and functional SCOTUS. And end this nonsense we have now as we've seen in an abuse Republican Congress who denied Pres. Obama his selection for a Supreme Court Justice, then allowing a Republican Congress now to push through another conservative Justice when it should have been a liberal one.

That, is wrong. It is illiberal. It is unAmerican.

It would then matter not who is in power at any one time because that seems to be the mistake we're seeing today. A mistake that has made America world wide, not only a laughing stock at times, but a bully super power.

Where we have one party in power illiberally as we have now with the GOP, giving us apparently a SCOTUS with soon to be a too long of a term court weighted incorrectly for the actual desires of the people overall.

Especially after again, what Republicans did during the Obama administration in denying a Supreme Court Justice in order to purposely skew the People's Supreme Court which is obviously not a fully Republican one and yet they seem to wish that to be the case.

Which would be a travesty of jurisprudence and Congressional oversight.

Did not know, as John Oliver points out, that we're the only democracy in the world with SCOTUS life terms. Not say, 18 year terms to coincide with presidential administrations. We need to pay attention about this. As Oliver mentions, during the Constitution writing, life expectancy was shorter and judges retired younger.

Now we have justices who in some cases are too older to be thinking clearly or quickly enough as we've seen actually happen in the past. And we've seen outdated, outmoded thinking by elder Justices affect our modern needs and concerns. Not to mention, many conservative Republican beliefs are typically outdated and out moded to begin with.

We have got to fix these issues one way or another (better in more enlightened intelligent ways however) because this, is not a functional situation and this, is going to happen again.

Besides we don't want an extreme America that is way too liberal or way to conservative. The world doesn't want that though I submit they would prefer a too liberal America over a too conservative one as we're seeing in being protectionist, and a bully.

We need now to do something! We need to guarantee from here forward that rather than this haphazard guessing game that is literally in some cases, killing people, a more stable and guaranteed continuous reliable and decent America. Because in skewing America one way or another in our judicial, in acting as our national personality governing our orientations and attitudes through our laws, that does indeed affect the entire world.

And as of this time I fear, some of that is leaning not the direction of the majority of the American people, not in a more democratic direction, but in one that makes the leader of another country, in that of Russia, smile in Putin is getting into bed each night. In believing the world is becoming more Russian than American, more autocratic than... democratic. Undemocratic. Illiberal. UnAmerican.

Understand, these comments about Putin and Russia are not just about them hacking our elections. This has been a long term goal of Russia over decades. It's been reported that Russia's "useful idiot" in Donald Trump (a KGB reference to useful foreigners they can use, many times even without their explicit knowledge) first got involved with Russian crime through their oligarchs back in 1987 (it's been more recently reported his connections go even further back to 1984 when he sold parts of Trump Tower to one of them, leading to money laundering issues). It has to do with the Republican party using old tried and true KGB methodologies on the American citizenry for decades now. Yes, it's a mess. One we need to clean up.

We need to get back control of America. Not for Republicans. Not for Democrats. Not for Russia or Putin. But for the American People overall. Which means also for those people of the world who wish to come here, be here or simply be proud again of knowing always in the world that there is a county such as America to be the shining light it once was for fairness and compassion.

And can be again. We have not had to make America Great Again" until the man who ran on that platform brought this country to her knees and now does indeed need to become the great country it once was, before he came on the scene. Before the Republican party for decades now, set the path downward for someone like a Donald J Trump to come onto the scene to disrupt, damage and destroy who we are and should be, at our core.

And it all starts...with our Supreme Court of the UNITED STATES of America.